The IT, international and stays managers and, of course, the “locals” Nicole and Jean-Claude Durand contributed to this page presenting the stay.

Located to the south of the Morvan massif,  Autun, at 310m above sea level, is a sub-prefecture of the department, and  a listed ‘Ville d’Art et d’Histoire’, with a population of about 13500. In the nineteenth century, it was centre of industry, with exploitation of the local oil shale (which had been mined since ancient times) and of fluorine.  In the twentieth century  theseacitivities gave way to the presence of national companies like Dim (textiles) and Nexans (industrial cabling).

The town became the capital of the Eduens (a Gallic people) after the defeat of Vercingetorix by Julius Caesar at Alésia.  Towards the year  15BC, the Emperor Augustus, wishing to make a demonstration of Rome’s power,  decided to create a city in Gaul, which he named Augustodunum, or the ‘Fortress of Augustus’. The city took for its motto, ‘Sister and Disciple of Rome’, which later provided the inscription ‘Autun of Gaul, Sister and Disciple of Rome’ on the front of the present Town Hall.

Autun still has many remains from the Roman period, and with ten structures still standing, it is the most important Gallo-Roman site north of the Loire. Notable amongst these are : 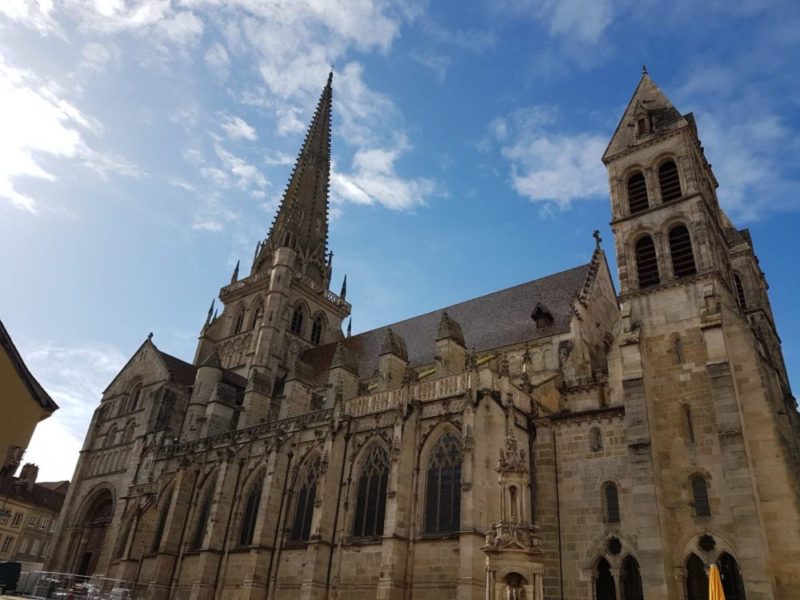 Autun lay on the part of the Compostelle pilgrimage route that began in Vezelay.  In 1120, work started on a church dedicated to St.Lazarus (a fifth century bishop from Aix-en-Provence). The church was finished in 1146, 148m in diameter, which could hold 20,000 spectators and during its restoration in the twentieth century, was consecrated a cathedral. 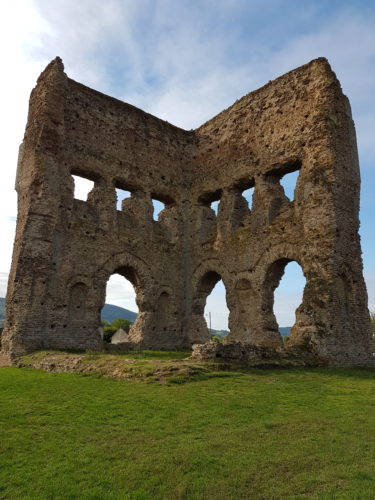 It is famous for itstympanum depicting the Last Judgement (fully restored in 2009) and for its more than fifty capitals, some decorated with ornamental designs and figures, and others with representations of foliage.
The Tympanum and most of the capitals are attributed to the sculptor Gislebertus. 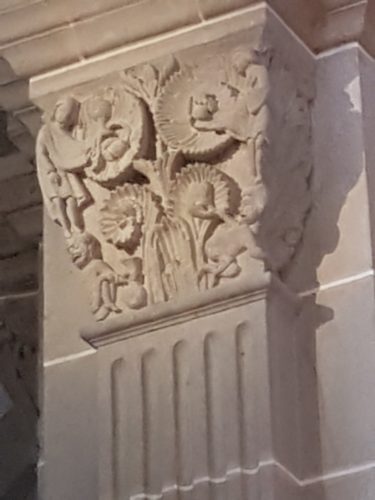 The Tympanum, that  was plastered over by eighteenth century monks, who did not appreciate sculpture, also escaped the depredations of the Revolution.

In the nineteenth century, the church was added to the schedule of Historic Monuments by Inspector Prosper Merimée, and restored by Viollet-le-Duc.

The pillar between the doors below the Tympanum, showing St.Lazarus and his two sisters, dates from the nineteenth century. 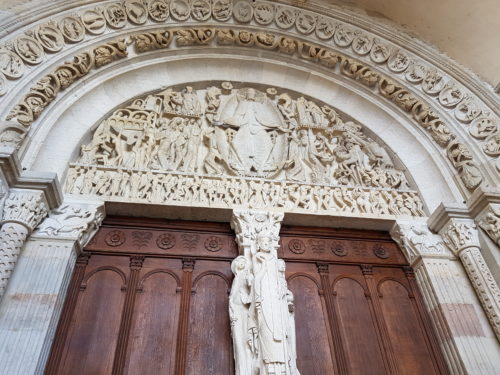 One circuit will be offered on Saturday, and another on Sunday morning. Both will be practicable either on a road bike or on an MTB, as the tracks are very easy.  Although this area doesn’t have many cols, it will nevertheless be possible to collect one or two. For those who arrive early or stay on afterwards, a supplementary circuit will be available. 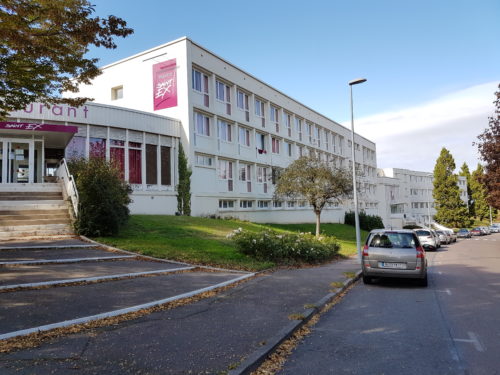 We will be staying at the EspaceSt.EX, part of the Ethic Etapes network. There are 116 beds in 53 rooms.

The town has several public car parks near the Espace Saint Ex: parking for mobile homes is allowed but there are no connections (electricity, water, etc.).

Note by the board

If you take charge of your accommodation elsewhere than in the holiday village, please inform us of your participation in the stay, for 3 reasons :

To be able to correctly size joint events (information sessions, welcome and farewell drinks).
To be able to plan a division into several groups on the courses in order to improve everyone’s safety.
For a better understanding of all the unexpected by the organizers.

Please note that the booking form consists of two pages : the Booking Form itself (please fill in all relevant sections and sign at the bottom), and the Conditions of Operation of the ‘Solidarity Fund’, that you should sign as well. If you are bringing a companion, please sign them up as an associate member with your Area Delegate, ahead of your booking and don’t forget to write their associate member number in the space provided. If, and only if, a participant does not have FFCT insurance, he/she must take out the obligatory insurance for accidents on the Booking Form. Considering cancellations participation in the Solidarity Fund is included in the cost of the reservation.

According to the times of your arrival and departure, the price will vary :

You can pay by cheque, or by transfer to the Club’s account. Because of the extra costs involved, we cannot take payments by PayPal.

Members are assigned in the order in which the cheque is sent or the transfer is made. For the former, the postmark is proof of the postmark, for the latter, make sure to send us a copy of the transfer order. If the stay is full, a waiting list is set up, it works with the same rules of priority assignment as direct registrations.

Will be available as soon as the 2020 Revue arrives in the mail boxes.
The last date for bookings is25th September 2020.

When we meet at the stays (and other events), we meet a lot of friends and famous faces but we are not sure we know their names at all, and we don’t always dare to admit it and ask for it. To try to remedy this, as announced at the GA in Bedoin, we propose to prepare a simple trombinoscope of the participants, with the photo, name and membership number of all those who will have transmitted (either before or with their registration) their photo and the authorization to publish it on the trombinoscope page of the Club’s website. You may send a digital photo of your face alone as a JPG file of good definition and quality, with a width/height ratio of ¾, mentioning your name and membership number, to photodemembre@centcols.org, or directly to sejours@centcols.org who will transmit it. Please make sure to tick the yes or no box on the registration form depending on whether you accept or not. If no box is ticked, the answer will be considered negative.

It will be held on site in the afternoon of Saturday. For more details please visit the General Assembly web page.

The notice of meeting and the statutory documents will be distributed as usual via an Info Cent Cols in October and will be available on the website.

At the end of the work, a drink will be served to meet us again in a less formal way.

Other activities or visits

A visit of the town of Autun can be arranged through its tourist office.

For those accompanying you, we can suggest some visits to Autun, a city of history and its surroundings:

It remains open to visitors all year round. You can access it freely with your vehicle, every day, except in case of bad weather. The museum closes from 11 November to mid-March. It has been classified as a natura 2000 site.