This Press Pack was revised by Denis Chouquet-Stringer CC 6183, May 2020

A Club shop, where members can obtain:

A line of cycle clothing in Club colours, bringing members together around shared values and a common image

– below, for example, an extract of 8 columns (from 31 in total) from the catalogue of the Cols of France “The Chauvot”, which contains nearly 11,000 cols in total. 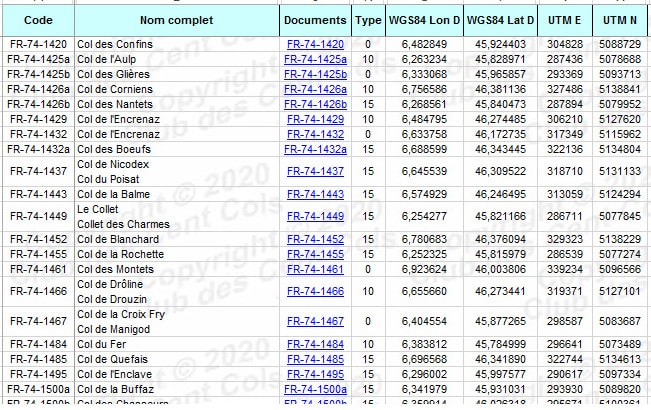 The “Type” column allows one to differentiate the cols between: 0=road, 10=track, 15=path etc

The “Documents” column provides an internet link to maps and other documents (photos, guides etc) linked to cols.  For example, the Col de Glières:

The passes are geolocated under 4 different systems. Here, in the example of the table, WGS 84 decimal and UTM

The catalogues are free for members, and included in the annual membership fee (15 euros)

This allows members to select the passes in the region they choose (country, administrative region, department, area on a map):

All these geographical tools allow you to optimise your choice of destinations and consider all possible routes. The most experienced members may choose high off-road mountain routes of considerable difficulty, while others may instead settle for quiet routes on small deserted roads.

These permanent trails can be undertaken as you please, over one or more seasons, starting at any point on the itinerary. Agpx trace and a precise roadbook are provided for all participants.

For example, in France, among the 14 available“randos” we have:

CENT COLS IN THE PAYS D’AZUR

Diplomas for all road passes completed by country

Challenge of the road passes on “The Alpine Watershed””

Challenge of the “Septentrion”

The Hundred Cols Club, a shared passion for cycling and the mountains

Press Pack was revised by Denis Chouquet-Stringer CC 6183, May 2020